This post is a quick revision guide on k-NN. The answers are neither of advanced level nor of the layman level. Some questions require proper answer and will be updated as I better my understanding

What is k-nearest neighbors?

k-NN is a classification technique. It tells as to which class a query point belongs to. 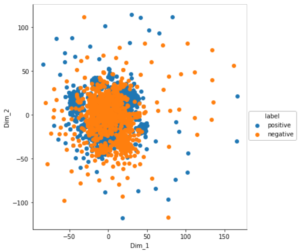 K-NN also fails when the distance of query point is equal from both positive and negative class.


Hamming distance is equivalent to the number of locations/dimensions where two binary vectors differ.

What is Cosine Distance & Cosine Similarity?

The cosine of the angle between two vectors is the measure of cosine similarity. More the similarity, lesser is the distance. Mathematically, Cosine Similarity = 1 - Cosine Distance

How to measure the effectiveness of k-NN?

Given a dataset with class labels, we divide the dataset into Dtrain and Dtest. We calculate the value of K on Dtrain. Now with the calculated K value we predict the class label of Dtest. Now to measure effectiveness, we will calculate accuracy on Dtest as-

What is the Limitations of KNN?

Biggest limitation of KNN is its high time and space complexity. If a data point is of d dimensions then for n points in Dtrain, the time complexity of finding the nearest neighbor for each of the n data point is O(nd).

The value of d could be very big depending on the data type. For example, in BOW of Amazon Review Dataset, d = 100K, for tfidf, it is 300K.

How to handle Overfitting and Underfitting in KNN

Why there is a Need for Cross validation?

The available dataset, D is divided into D-train and D-test. While D-train is used to train the model, D-test is used to evaluate the right value of K. The right K corresponds to the highest accuracy on D-test.
Accuracy on D-test = (Points for which D-train and K-NN gives correct class label)/(Total number of points in Dtest)

This accuracy can be calculated only on D-test .Hence, we calculate accuracy for different values of K, then decide on the right value of K. But, we cannot say that for future data also, this K value would give the highest accuracy. For this problem, we have a concept called as Cross validation. In Cross Validation , the concept is to use D-cv instead of D-test to get the right value of K. So now, the dataset is divided into three disjoint sets which are, D-train, D-test and D-cv.

While D-train is used for training the model, D-cv is used to get the right value of K. D-test is now the unseen (or future) data.

What is K-fold cross validation?

In K-fold cross validation, D-train itself will be used to get the value of K instead of D-cv. The K in K-fold is not the same K as the K in KNN.

Advantage: Here we have used the entire Dtrain to calculate K. We have not used Dcv or Dtest. Dtest remains an unseen data. Rule of thumb: Use 10 fold cross validation.

What is Time based splitting?

For time based splitting, data should have a time feature (say timestamp). Whenever time is available and if data changes over time then time based splitting is preferable to random splitting. Dividing the dataset into D-train, D-test and D-cv on basis of time. We have to make sure that the available dataset is sorted on basis of time. After that, we can use the first 60% of data as D-train. Next 15% as D-cv and next 15% as D-test.

What is weighted k-NN ?

After we evaluate distance between nearest neighbor and the query point, we will give higher weight to closer distances (lower weight to farther distances) and then take the class label on basis of higher weight. Evaluation of weight from the distances can be done so using formula. The simplest formula which can be used is: weight = 1/distance (there could be different formula to calculate the weight).

Sometimes, the class label of a query point under consideration could have been +ve in some cases had we would have taken only majority vote. But, with weighted k-NN, we have a -ve label.

What is Locality sensitive Hashing (LSH)?

Similar to hashing in data structures. In Locality Sensitive Hashing, given a data point x, it computes the hash function on x. The result of hash function on x and its neighbor is such that they all end up in the same bucket in hash table.
Given a query point, we can find its hash function and see as to which bucket it ends up in. By looking at the values of the bucket, we know as to which class/label that query point belongs to.

In LSH for cosine similarity, vectors which are cosine similar will go inside the same bucket in the hash table. [help me in writing this in detail]

In LSH for euclidean distance, vectors which are closer in distance will go inside the same bucket in the hash table. [help me in writing this in detail]